Over the years, the iconic American Southwest has been associated with many things—vast desert landscapes, dry heat, rattlesnakes—but perhaps the most accessible and definitely most fashionable is Southwestern jewelry. Turquoise, silver, shells and coral are all staples of the ever-fashionable and coveted Southwest jewelry. American Indian artists have crafted Southwestern bracelets, necklaces, earrings and rings for many years. Jewelry like Southwest bracelets has been a beautiful wearable form of art dating back thousands of years. A clear example of a Southwest bracelet was discovered as early as 1540.  In fact, evidence of beadwork and Southwestern jewelry experimentation dates back to 6000 BC through a recent discovery of Olivella shell beads in Nevada. 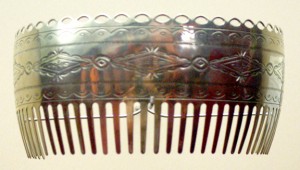 Examples of early American jewelry designs were discovered in early pre-Columbian ruins across the Southwest. Some of the oldest discoveries have been made in Clovis, New Mexico, where evidence shows well-designed stonework in flaked projectile and knife points. Using similar techniques, beads were also made of bone and stone to create jewelry like Southwest bracelets, necklaces and pendants. Examples like these are consistently found throughout New Mexico and Arizona.

The Hohokham culture, found in the central valley of Arizona, is known to make ornaments and beads made from shell. The use of shell is a significant find because Arizona is a landlocked state indicating the importance and rarity of shell. The shell and turquoise combination signifies the value both materials must have had. Signs of turquoise and shell are found in jewelry through many southwest archeological sites. It would appear that this method of jewelry making is one of the oldest continuously occurring forms of jewelry in America.

Further advancement of the Southwestern jewelry making came through the Plains through Spanish and Mexican influence and metal smiths. In the 1820 Southern Plains Native Americans cut, stamped and cold-hammered silver to create a different types of jewelry including the Southwest bracelet. This style is still used to this day. However, it wasn’t until 1870 in Flagstaff, Arizona, that the first documented Navajo silversmith was recorded in Flagstaff, Arizona.